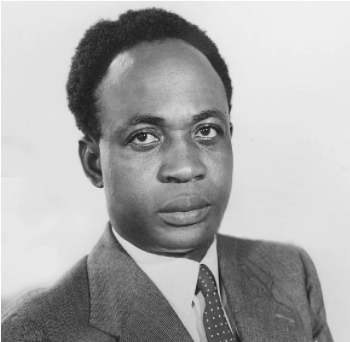 Born on September 21st, 1909, Kwame Nkrumah was the first prime minister and then president of the Republic of Ghana.

In his early years of life, Nkrumah was considered to be a bright and gifted student. In 1935 he attended Lincoln University in the United States where he obtained multiple degrees including education theory, sociology, economics, and philosophy. During his continued education in London England, Kwame played a role in black-nationalist organizations and wrote about African unity and independence from white-minority ruling making him a prime supporter in Pan-Africanism. Pan-Africanism centers around the movement of unity and political independence of Indigenous inhabitants of Africa. Finishing his studies, Kwame decided to become secretary-general of the West African National Secretariat while also being the vice-president of West African Students Union. Strong headed and sure of his intentions and beliefs, Kwame sacrificed being imprisoned because he was such a strong advocate that he became a threat to those in power at the time leading colony-wide strikes. After being released from imprisonment, the British governor of the Gold Coast appointed Kwame leader of government business. Kwame further proved his strength in leadership and only a year after being appointed leader of government business, he became prime minister from 1954-1956.

Through his guidance and leadership, Kwame successfully led Ghana (previously known as the Golden Coast) into independence.

Beyond Ghana, Kwame sought to unify Africa, politically and economically. He also had bigger plans and sought the liberation of the entire continent, and although his plans were not set through, his years of advocacy, leadership,and efforts helped create the Organization of African Unity (OAU).